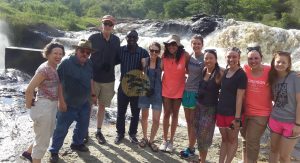 Murchison Falls National Park (MFNP) is situated in north-western Uganda stretching from the shores of Lake Albert up to the Karuma falls. The park is situated in the district of Amuru, Lolim a region where the Bunyoro escarpment joins the Acholi plains. Murchison Falls Park Uganda is at latitude 2.145768 and longitude 31.806906 on GPS coordinates 208’44.7648’’N and 31048’24.8616’’E

Murchison Falls Park is 3,840km2 making it the largest Uganda safari park. With the adjacent Bugungu Wildlife Reserve (748 square kilometers) and Karuma Wildlife Reserve (720 square kilometers) it forms the Murchison Falls Conservation Area. Murchison Falls Park is the location where the Nile River waters squeeze through a narrow 7 meters (23ft) wide gorge then plunge into what is known as the devil’s cauldron, 43meter (141ft) below with a thunderous roar, water spray and beautiful rainbow. The falls actually lends its name to the park.

Formerly known as Kabalega Park, Murchison Falls Park became Uganda’s first national park in 1952 when the British administration established the National Parks Act of Uganda. However, the area was first gazetted as a game reserve in 1926 to protect the beautiful savannah grassland and wildlife making it the oldest conservation area to be gazetted. In 1862, John Speke and James Grant were the first European Explorers to visit the present day Murchison Falls Conservation Area. 1863-4, Sir Samuel Baker and Florence Baker, thoroughly explored the area and later on named the falls Murchison Falls. Sir Samuel Baker named the falls after the then geologist Roderick Murchison the then president of the Royal Geographical Society.

In 1910, Bunyoro Game Reserve was created situated south of the River Nile within the districts of Buliisa, Masindi and Kiryandongo. By 1928, boundaries were further extended north of the river to the present day Nwoya district.

The park is a good all year round safari destination though the best time to visit is during the dry season.

The advantage of visiting Murchison Falls National Park in the dry season is that, the park is dry therefore grass is short and animals are easier to spot. Photography is easy too as well as trails being dry for easy movements. However, travelers should note that this is a peak or high safari season in Uganda and therefore early booking is recommended and it can also be very hot.

The wet season is considered to be the less preferable season to safari Uganda’s Murchison Falls Park is known to be in the months of March to May and October – November. However, the rains are normally not so heavy to interfere with safari activities. Rainfall totals reach a maximum of 150mm in October which is average compared to high altitude parks. During the rainy season there is a beautiful greenery backdrop great for photography.

Note: No matter the time of the year Murchison Falls Park is the best park to tour all year round with less weather interferences.

How to get to Murchison Falls National Park Uganda

From Kampala-Uganda’s capital, Murchison Falls National Park is 282km away on a 4h 32min drive. The Budongo forest route from Masindi is rewarding with magnificent views overlooking Lake Albert. For tourists arriving at Entebbe International Airport, you will go through Kampala which is about 47km from the Airport.

Masindi, the closest city from the park is 72.4km away on a 1h 26min road drive.

For travelers from the north, you can access Paraa (the popular safari start point) through Chobe gate, Tangi gate and Wankwar gate.

Getting to Murchison Falls National Park by air is possible since there flights to Pakuba, Bugungu and Chobe air fields from either Entebbe or Kajjansi airstrip. From Entebbe International Airport, Pakuba airfield is a 1 hour’s flight especially chartered by Aerolink. Pakuba Airfield is 54.1km to Murchison Falls on a 1h 40min drive including a ferry crossing.

Bugungu Airstrip is 1 hour’s flight from Entebbe International Airport. It is convenient for tourists going to stay in the southern part of Murchison Falls National Park.

Booking a chartered flight to Murchison Falls National Park can best be done by a safari tour operator.

Murchison Falls is the highlight of the Murchison Falls Park. Murchison Falls is a beautiful feature formed as the Nile River waters squeeze through a narrow 7 meters (23ft) wide gap of rocks then plunge into what is known as the devils cauldron, 43meter (141ft) below with a thunderous roar, water spray and beautiful rainbow. The falls actually lends its name to the park. The spot is so spectacular for photography and sightseeing.

Activities / what to do at Murchison Falls National Park

A boat cruise is almost a must do Uganda tour activity on safari itineraries for tourists heading to Murchison Falls Park. Boat cruises set off from the jetty at Paraa on the south bank to the bottom of the mighty Murchison Falls thronged with numerous hippos and crocodiles. A boat cruise can be organized as a visit to the bottom of the falls (upstream) just for spectacular views and aquatic animal seeing or to the Victoria delta that stretches to the shores of Lake Albert (downstream). However, launch trips can also be organized as sundowner trips with snacks, Most popularly following a morning game drive, a boat cruise can be organized to suit a travelers interest. It’s the best way of seeing the world’s strongest waterfall.

A game drive lasts about 2-4 hours, early morning ferry crossing at Paraa may be required and a knowledgeable safari guide is recommended.

Sport fishing in Murchison Falls National Park
For avid anglers on Uganda tours, sport fishing in Murchison Falls National Park is rewarding with several opportunities of catching a large Nile Perch. The possible fish types caught on sport fishing include the Nile Perch, Catfish, Tiger fish, Electric cat-fish, Tilapia. The largest fish ever caught was a Nile Perch weighing 113kgs. For sport fishing, anglers are required to have a fishing permit that can be booked early via your Uganda tour operator. Since it’s a sport, the activity includes catching fish by casting lures and other fishing methods. Anglers are advised to carry or hire their fishing equipment.

Fishing in Murchison Falls National Park can be done at any time of the year, though the best time is when water levels are low during the period of mid-January – Early April. The best time of the day for fishing is said to be in the morning and late in the day.

This 3 Days Murchison Falls safari Uganda is a short wildlife Uganda safari to Murchison Falls Park Uganda which is Uganda’s oldest and largest (3,840km2) safari park in just 3 days. This tour is available all year round. Read More

Accommodation / where to stay in Murchison Falls National Park

Welcoming all kinds of travelers, Murchison Falls Park Uganda also has accommodation for all kinds of clients ranging from Luxury/ up-market, mid-range/standard to Budget/basic. Here are the highlights of each category accommodation type;

Paraa safari Lodge
Paraa Safari Lodge offers a unique blend of comfort, relaxation and adventure. Each of the 54 rooms at the Lodge is a haven of style and serenity, complete with a balcony and a private bathroom. The safari décor of the lodge still reflects the bygone era of the early explorers, enshrined with a modern touch to offer memorable comfort moments on safari. Accommodation options at the lodge include cottages (Queen’s cottage), suites, double, twin, single rooms and safari tents.

Baker’s Lodge
Baker’s lodge derives its name from the historic Explorer Samuel Baker. It is situated on the south bank of the mighty Nile River set within a large private area with direct river access. At the lodge, you also have access to views of the nesting egret birds, bathing elephants and pods of hippos. The most memorable thing you can decide to do on your stay at Baker’s Lodge is have a bush dinner.

Murchison River Lodge
Murchison River Lodge is located on the southern bank of the River Nile offering comfortable and relaxing mid-range accommodation. The Lodge is well set with en-suite thatched cottages (with solar fans and USB port), thatched safari tents each with private facilities and comfortable camping tents already set up though a traveler can bring in their own tents. The Lodge offers comfortable accommodation for families, couples, groups and solo travelers. The Lodge also has a bar and restaurant, swimming pool and craft shop.

Fort Murchison Lodge
Fort Murchison Lodge is set on the Eastern banks of the slow flowing Albert Nile. The massive tower, the earth colored walls, the touch of Swahili style will impress you from your arrival up to your departure.

Red Chilli Rest Camp
Red Chilli Rest Camp is superbly situated at Paraa on the southern bank of the River Nile in the heart of the park. The Lodge is just 500 meters from the Paraa ferry where all vehicles cross the Nile for game drives, boat cruises and sport fishing. Red Chilli Rest Camp has a fully stocked bar and restaurant, a bonfire is lit in the evening, solar hot water systems, modern toilets, showers and a lot more.

Heritage Safari Lodge
The accommodation at Heritage Safari Lodge consists of luxurious and standard cottages as well as tents. The cottage give guests a 180 degree view; to the east, the early morning sunrise and hot spring, to the immediate south right in front of the cottages the hot spring a s it flows into the Nile and to the West the Albert Nile itself with the community in their canoes going about their daily routine. The cottages are designed to allow unique and flexible bedding arrangement to suit each guest’s unique requirements.