Uganda has 1 endemic bird (not found anywhere else in the world) known as the Fox’s Weaver found in the districts of Kumi and Soroti. 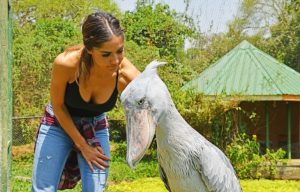 The Shoebill Stork is endemic to Africa and Uganda has a number of them in different spots including Mabamba wetland and Murchison Falls National Park. This is a sought after bird specie and a must see for many bird watching safari Uganda tourists.

Uganda has birds throughout the country however, there those top spot with high bird populations that a birder should have on their itinerary and these include;

What to carry for Uganda birding safaris

Packing for a trip is as important as booking your dream safari, to pack for a Uganda birding safari always remember to include these on top of your wish list;

Though Uganda bird watching tours can be undertaken year round, the best time for birding safaris in Uganda is during the dry season from late May to September. The factor that affects trips most is the weather and climate and Uganda as a country has 2 seasons in the south, the dry season being June –August and December – February and the rainy season March –May and September – November. To the north, late March – early November is the wet season and November – March being the rainy season. None of these weather conditions is extreme and birding safaris can be done any time.

However, if planning to visit any specific spot, remember to check out the best time for birding in that specific park or bird watching site.