Uganda wildlife safaris are a top pick of the African safaris since the beautiful rolling plains of the Pearl of Africa have ever since hosted a count of about 345 mammal species seen on wildlife safaris in Uganda. Uganda’s wildlife comprises of West African and East African mammal species hosted by the beautiful hills, mountains, swamps, forests and savannah plains scattered throughout the country’s conservation areas including national parks and game reserves.

Mountain Gorillas and Chimpanzees are the highlights of Uganda wildlife tours an advantage from the mix of savannah and forest parks. 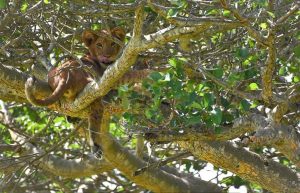 Aquatic animals like hippopotami and Nile crocodiles can be seen in national parks like Queen Elizabeth National Park and Murchison Falls National Park.

Primates seen on wildlife safaris Uganda include Chimpanzees (the highest population in the world is in Uganda), several species of Central Africa monkey like the Uganda mangabey, Ugandan red colobus, L’Hoest’s monkey. Other primate species in Uganda include the black-and-white colobus, the blue monkeys, Patas monkey and the Golden monkey – only found in Mgahinga Gorilla National Park in Uganda.

The best time for wildlife safaris in Uganda is in the dry season. The dry season in Uganda is during the months of December – February and June – September. During this time all Uganda national parks are open and roads are passable, photography is easier since grass is shorter, wildlife collects along waterholes making viewing so easy.

What to pack for Uganda wildlife safaris

What to pack for Uganda wildlife safaris

How to book for Uganda wildlife safaris

The best way of booking for a Uganda wildlife tour is by contacting a renowned Uganda tour operator. Wild Jungle Trails Safaris has for over 10 years planned thousands of Uganda wildlife safaris to all of the 10 national parks of Uganda as well as other conservation areas and therefore highly recommendable.
Car Hire Rental to Your destination

This 3 Days Murchison Falls safari Uganda is a short wildlife Uganda safari to Murchison Falls National Park which is Uganda’s oldest and largest (3,840km2) safari park in just 3 days. This tour is available all year round. Read More