Golden monkeys in Uganda can only be seen in Mgahinga Gorilla National Park which is also a Mountain Gorilla habitat in south western Uganda. Golden Monkey trekking Uganda safaris to Mgahinga Gorilla National Park is the only and best way of catching a glimpse of the beautiful golden-orange coated primate species. Golden Monkeys total to about 3000 – 4000 in number existing in the bamboo forests of the Virunga massif. 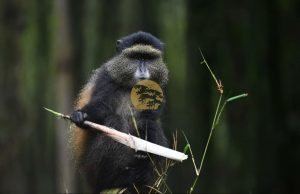 Golden Monkeys (Cercopithecus Kandti) are a species of the Old World monkey found in the Virunga Volcanic Mountains including Mgahinga Gorilla National Park and Volcanoes National Park in Rwanda. Golden monkeys are restricted to the highland forest especially near bamboo of which they feed on the leaves.

Golden Monkeys live in social groups with about 30 – 80 individuals in each. Though moving in large groups during day, in the night golden monkeys sleep in small sub groups of four at the top of bamboo plants. They use dense bamboo plant or several bamboo plants that weave together to make a sufficient foundation for sleep.

Golden Monkey trekking is less exhausting than the popular gorilla trekking in Uganda since they are not so mobile and prefer staying in almost the same area. A glimpse at golden monkeys is priceless since they are beautiful and playful through the bamboo stems. However, with their very playful character a trekker needs a high quality camera to capture their pictures since they leap so fast.

To have a golden monkey tracking safari in Uganda, one needs to purchase a permit prior and this can be done through a tour operator. Golden Monkey trekking starts at 8:00am each morning with briefing then after head to the Gahinga trail. On reaching the presence of the golden monkeys, only 1 hour is spent in their presence out of the 2-4 hours spent on the trek.

Best time to do Golden Monkey trekking in Uganda

The best time for a golden monkey trek is the best time to visit Mgahinga Gorilla National Park and this is during the dry season in the months of June – August and December – January. Being a high altitude park (2,227m and 4,127m) the rainy season makes it hard to trek golden monkeys since the vegetation becomes dense and photography becomes difficult. The advantage with trekking golden monkeys in the dry season is that photography is easy and the park is easy to reach since roads are not so slippery.