Queen Elizabeth National Park is undoubtedly one of the popular Uganda wildlife safari destinations known for the tree climbing lions in the remote ishasha sector. 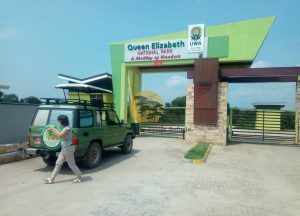 Queen Elizabeth Park Uganda spans the equator line and is home to over 95 mammal species and 600 bird species.

This is a guide on all of the relevant information about Queen Elizabeth Park ranging from Background, Location, attractions, activities, best time to visit the park, how to get there by road and air, Uganda safaris to Queen Elizabeth National Park and accommodation facilities;

The about 1,978 square kilometers scenic Queen Elizabeth Park is situated in the western region of Uganda spanning the districts of Kasese, Kamwenge, Rubirizi and Rukungiri. Sitting in a very diverse region, the park includes the Maramagambo Forest bordering the Kyambura Game Reserve, Kigezi Game Reserve and Kibale Forest National Park in Uganda. Queen Elizabeth Park extends from Lake George in the north-east to Lake Edward in the south-west connected by the 36km long Kazinga channel a popular boat cruise spot for many Uganda wildlife safari tourists

Founded in 1952 as Kazinga National Park, the area covered by Queen Elizabeth National Park was a grazing area for the local Basongora pastoralists. As a result of cattle raiding from the Bunyoro and Buganda kingdoms, the area became highly depopulated and the Basongora social economy could not recover from these events and most of them turned to fishing.

This allowed game population to increase and vegetation change significantly. In 1906 the British protectorate government declared the area north of Lake George a game reserve to prevent unregulated hunting. In 1912, further gazetting was done with the whole of Lake George and ishasha areas declared restricted areas, this pushed communities further leaving the place abandoned. Following lobbying from the then chief warden Bruce Kinloch Queen Elizabeth Park then known as Kazinga National Park was legally gazette in late 1952.

The best time of the year to visit Queen Elizabeth National Park is during the dry season months of the year between the months of June – August and December to February. During this time, the rains are less and animals are concentrated close to the water points making it easy to see all of the dramatic side of the wild. In the dry season still, roads are not flooded or made impassable by rains making tours more lively.

However, if you plan to tour Uganda in the dry season remember to book accommodation facilities early since tourists flock the country at this time and prices get high as well as space fully booked.

How to get to Queen Elizabeth Park Uganda

From Kampala (Uganda’s capital) the park is 370km away on a 6h 20min drive along the fastest route. Along Mbarara-Kasese Rd, Mbarara-Masaka Rd it takes a 7h 17min drive.

Attractions / what to see in Queen Elizabeth Park Uganda

The hippos and crocodiles can be seen at the Kazinga channel, Crocodiles have just reappeared after they had disappeared for thousands of years due to toxic ash from local volcanoes that eliminated them. Primate species like the black and white colobus monkey can be seen. Chimpanzees have also been habituated for tracking by Uganda chimpanzee trekking safari tourists. These are found in the Kyambura Gorge.

Over 600 bird species are hosted within the boundaries of Queen Elizabeth Park. This is the only Uganda tour park with such a big number of bird species within its boundaries making it an ideal Uganda birding safari destination. With this number of bird species the park is positioned as the second highest bird Population Park in Africa and 6th highest in the world. Bird watching tourists can expects to spot birds such as the Grey Wood Pecker, Cuckoos, Speckled Tinker bird, Purple-headed Starling, White-spotted fluff tail, Spur-winged Plovers, African Fish Eagle, African Jacana, Cormorants, Pied Kingfishers, Black Crake, Water-Thick Knee, Malachite, Martial Eagle, Grey-headed Kingfisher, Papyrus Gonolek and many more. The greater and lesser flamingos seasonally visit Lake Munyanyange close to Queen Elizabeth Park and a birder could easily spot them between October and April.

Evidence to the past times bubbling volcanic activity, the huge round basins scattered across the equator are scenic crater lakes to sight on a Queen Elizabeth Park tour. The 27km drive between Kabatoro gate and Queen’s Pavilion offers the most views of these crater lakes. The crater fields include the Katwe Explosion Craters, Bunyaraguru Crater Field on the Kichwamba escarpment and the beautiful Ndali-kasenda Crater field close to Kibale Forest National Park. The craters are a beautiful place for great views and splendid hiking.

Activities / What to do at Queen Elizabeth National park

Since the park is connected by the almost 40km long Kazinga channel, a boat cruise is a must do activity for tourists on a visit to the park. Usually, each day the boat sets off at either 9:00am local time or at 2:00pm in the afternoon taking tourists along the hippo filled shores of the channel with sights of the elephants roaming around the shores. There also several bird species along the shores. The boat cruise / launch trip on the Kazinga channel lasts about 2 hours and is memorable no matter the time of the day.

Bird watching is one of the Queen Elizabeth National Park activities due to the several bird species within the park. With beautiful birds like the White-spotted fluff tail, Spur-winged Plovers, African Fish Eagle, African Jacana, Cormorants, Pied Kingfishers, Black Crake, Water-Thick Knee, Malachite, Martial Eagle, Grey-headed Kingfisher, Papyrus Gonolek and many more birding in Queen Elizabeth Park is rewarding. For Uganda birding safaris tourists, the best time for birding in the park is between December – February.

Safari Uganda tourists to Queen Elizabeth National Park can track chimpanzees at the Kyambura Gorge. The Kyambura Gorge is also known as the valley of apes situated in the far eastern corner of the park. Approximately 1km across at its broadest point and about 100 meters deep, this is one of the scenic places a traveler can ever visit. Though host to a small number of chimpanzees compared to other destinations like Kibale Forest National Park and Budongo forest the Kyambura gorge offers an experience of walking within a densely forested valley. Walking through the valley floor, the trek is amazing as tourists come along other primate species. This is a perfect add on to any trip to Queen Elizabeth National Park.

This 9 Days Uganda chimpanzee trekking and Primate Safari is a wildlife safari in Uganda majorly having more encounters with chimpanzees, other primates as well as more wildlife species like lions. Read More

Being a top Africa safari destination, tourists have the privilege of accessing accommodation in Queen Elizabeth Park ranging from Luxury / Up market, Mid-range / standard to Budget / basic hotels and lodges. For tourists to get a highlight of the top pick hotels in all categories here are a few;

Mweya Safari Lodge
Mweya safari lodge, located on the peninsula within the heart of Queen Elizabeth National Park offers visitors an unforgettable experience during their stay. Stunning views greet you through large windows in the lodge’s foyer, where you receive a warm welcome. To the east of the lodge lie the Great Rift Valley hills, separated from the Mountains of the Moon by the meandering Kazinga channel.

Katara Lodge
Katara Lodge is situated on the Great Rift Valley escarpment with uninterrupted views of the savannah, Lake Edward and the Virunga and Rwenzori mountain ranges beyond. Katara lodge is located 16km from the Katunguru gate of the Queen Elizabeth National Park. Katara Lodge is the ideal base from which to explore the park and the many activities it offers.  The Lodge offers accommodation in eight luxurious thatched cottages on a beautiful stretch of hills. Each spacious cottage was hand crafted using locally available materials and carved into the hillside by the Katara Village community.

Enganzi Lodge
Enganzi Lodge is a perfect gateway to the mighty Queen Elizabeth National Park. Enganzi lodge offers standard accommodation in a location so perfect to start your journey to the wild. The lodge offers lodging facilities in their single rooms, double rooms, deluxe suite and isolated cottages. Enganzi lodge is located in a stunning position just overlooking the park making it an excellent property with phenomenal views. For Mid-range travelers, planning to stay at Enganzi Lodge, early booking is recommended.

Ihamba Safari Lodge
Ihamba Safari Lodge is situated on the shores of Lake George in Queen Elizabeth National Park. Born out of love for nature and animal preservation the lodge is a perfect location for those who want to experience the tranquility of unspoiled Africa. Ihamba Lakeside Safari Lodge’s unique charm is in the atmosphere of intimacy, welcoming ambiance and a splendid customer service that is carefully rendered to esteemed guests.