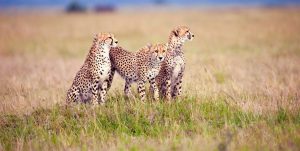 Serengeti National Park is a popular Tanzania safari destination within the Serengeti ecosystem in the Mara and Simiyu regions. One of the world’s natural wonders –the wildebeest are in the Serengeti making the park famous for the annual wildebeest migration. Wildebeest migration constitutes of over 1.5 million wildebeest and about 250,000 Zebras. Being a great destination to tour in Tanzania, here is a guideline on all of the relevant information for travelers wishing to visit the park.

The park can be divides into three sections which are the southern/central part (Seronera Valley) with endless acacia dotted savannah plains, the western corridor marked by the Grumeti River and the North, Lobo area that meets up the Masai Mara Reserve. All of these regions are good for Tanzania wildlife safaris on game drives for search of wildlife.

Before 1892 when the first explorer Oscar Baumann visited the Serengeti, this was a grazing land for the Maasai people. The Maasai people grazed in the plains of the eastern Mara region which they named siringet meaning a “place where land runs on forever”. The name Serengeti was later on derived from this description and no wonder with this vastness this is home to one of the greatest spectacles of wildlife on earth.

Established in 1952, Serengeti National Park remains one of the most biologically diverse parks. For conservation purposes, the British evicted the resident Maasai from the park area in 1959 moving them to the Ngorongoro Conservation Area. Till date the Maasai culture is strong and Tanzania safaris tourists can involve in the cultural experiences of the Maasai.

The best time for a wildebeest migration could probably change but it’s from June to July when the wildebeest are crossing the Grumeti River and the calving season is from late January to February. July to March records the highest number of tourists to the park and therefore expect to find Serengeti National Park crowded.

How to get to Serengeti National Park

Getting to Serengeti National Park can either be by air or by road depending on your arrival destination. There are four main entry and exit points and these are the Naabi Hill Gate (most heavily trafficked), Ndabaka Gate (main gate from the western corridor), Klein Gate (in the far north east) and the Bologonya Gate (from Kenya though the gate is closed. Here is how to get to Serengeti National Park either by road or Air;

From Arusha, you can still take a small plane to the various seven airstrips in the park.

Most of the Tanzania tours to Serengeti National Park start from Arusha town. The drive from Arusha to the Serengeti is about 235km and will take a drive time of about 5 hours. The drive is on a bumpy, dirt road with beautiful scenery.

It is also very possible to combine these two options with having a road safari one way and a flying safari the other way.

Your Route to Serengeti National Park

Attractions / what to see in Serengeti National Park

Known for its abundance of wildlife, Serengeti has lots of safari attractions and activities that bring in many travelers and here is what to see and do in Serengeti National Park;

Wildebeest in Serengeti
With about 1.5 million migratory and resident wildebeest, these constitute of the largest population of big mammals that still roam the earths’ planet. The wildebeest in Serengeti have an annual migration through to the plains of Masai Mara Game Reserve of Kenya with the most dramatic moments in the Grumeti River within Serengeti Park.

Wildebeest also called the gnu is an antelope in the genus Connochaete belonging to the Bovidae family. On their annual migration over a million wildebeest are joined by about 200,000 plains Zebra, 300,000 Thomson’s and Grant’s gazelle, tens of thousands of topi and Coke’s hartebeest.

Kopjes of Serengeti National Park
Kopjes are huge granite formations popular within the Serengeti Park. The granite Kopjes of Serengeti are host to rock hyraxes and reptiles such as the agama lizards and snakes. The Kopjes are also a perfect resting place for animals like the lions, leopards as well as the black tear marked cheetah. Relaxing here for the animals are basically for two reasons; one, this is a good vintage point for potential prey and the other is that the kopjes offer shade during the scorching heat.

Wildlife in Serengeti National Park
Numerous wildlife can be seen on wildlife safaris to Tanzania and these include the wildebeest, plains zebras, Thomson’s gazelle, Grant’s gazelle, Topi, Coke’s Hartebeest, Waterbuck, Masai Giraffe, Impala, Warthog, Hippos, Lions, Leopards, and Cheetahs. These can easily be seen on a game drive in the park.

There some rare antelope species in the park and these are the dik dik, roan antelope, bushbuck, greater kudu, common eland, fringe-eared oryx and klipspringer. Carnivores in the park include the cheetah,, spotted hyena, honey badger, East African wild dog and many more. A few primates can be seen in the Grumeti River.

Big five sought after African safari animals can be seen in Serengeti National Park and these include the Lions (about 3000 and believed to be Africa’s largest population), African leopard (especially within the Seronera region), African bush elephant (particularly in the northern region), Eastern black rhinoceros (mainly found around the kopjes) and the African buffalo (about 53,000 individuals in the park).

Five bird species are endemic to Tanzania and part of them is the Fischer’s Lovebird, Grey-breasted spurfowl and Rufous-tailed weaver.

Activities / what to do at Serengeti National Park

Game drives in Serengeti
Game drives in Serengeti are the best way of getting up close to millions of wildlife in Tanzania. On a game drive in the southern plains; the almost endless grass plains are amazing. The Seronera Valley in the southern region is the heart beat of the park with acacia dotted plains hosting lions and leopards that can easily be spotted. The Seronera River banks are beautified with a lining of the lush palm tree, yellow fever acacias and sausage trees. Aquatic wildlife like the hippopotami can be seen in the Retima Hippo pool. A part from wildlife bird species like the Marabou storks, Black Headed Herons and many more birds can be seen.

On a game drive in Serengeti, visiting the Kopjes is a good way of seeing several wildlife species like the lions, leopards and cheetahs. The Kopjes on a wildlife safari in Tanzania are rewarding for an afternoon game drive since animals and reptiles relax on the kopjes as a source of shade from the scorching sun.

The best time for bird watching in Serengeti is during the months of November to April since its nesting time for resident species.

Serengeti National Park is the heart beat of safaris in Tanzania and therefore has lodging facilities that cater for all kinds of travelers including Luxury, Mid-range as well as Budget and camping accommodations. Here a few of the lodges in each of the lodging categories;