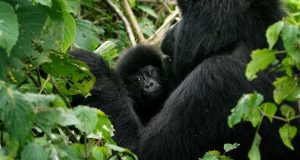 TSituated within the Albertine Rift valley, the park is situated in the eastern part of the Democratic Republic of the Congo. Virunga Park is within the Virunga mountain ranges that are trans boundary among Congo, Uganda and Rwanda. The park is adjacent to Mgahinga Gorilla National Park in Uganda and Volcanoes National Park of Rwanda. These are all habitats to the elusive Mountain gorillas conserved by the different governments in their country.

Established in April 1925, Virunga Park Congo is the oldest Africa safari park started by the then king of Belgium King Albert 1. By then the park was called Albert National Park conceived as a science oriented nature reserve with the aim of studying and conserving wildlife. In 1929, the protected area extended encompassing the Virunga Mountains, parts of the Rutshuru territory and the plains south of Lake Edward. Reforms continued in the park until 1994 when the park was entered into the List of World Heritage in Danger. In 1996, it was listed as a Ramsar site of international importance. The Virunga Foundation, a non government organization is responsible for park management since 2010.

Till 2018, Virunga has been facing conflict that saw the park close for 8 months till it was reopened in February 2019 for tourists to visit.

The best time to visit Virunga National Park depends on the activity going to be undertaken in the park. Between the winter dry season of May and October game viewing is at its best however, the best time for gorilla trekking in Virunga is during the period between June and early September.

Note that the park is an all year round Congo safari destination with July – September being the driest months. At this time gorillas will move further into the forest and therefore expect longer hikes.

How o get to Virunga National Park Congo

Getting to Virunga National Park is possible both by road and by air either from within the country or from other countries. Here is how to get to Virunga either by road or by air;

From Goma town close to the border with Rwanda, the park is on a drive distance of 362km away with a drive time of about 10 hours.

From the neighboring Kigali, the drive to Virunga National Park is about 7-8 hours on a 383km drive crossing through Uganda and about 12 hours through Rwanda.

Flights to Congo are possible to Goma Airport for tourists visiting Virunga. Flights can be chartered to Goma by Ethiopian Airlines; however the flight is once a week, Turkish airlines, Brussels airlines, Swiss airlines and Kenyan airlines.

The best way to have a flight is to Kigali International Airport in Rwanda then connects by road to Virunga National Park.

Your Route to Virunga National Park

Mountain Gorillas
Mountain Gorillas (Gorilla beringei beringei) are part of the top attractions in Virunga National Park. This is a sub species of the eastern gorilla listed as Endangered on the IUCN Red List with total population about 1004 as of 2019. Virunga National Park is home to 8 gorilla families which are Rugendo, Munyaga, Mapuwa, Lulengo, Kabirizi, Bageni and Nyakamwe Mountain gorilla family. These gorilla families are each head by a male silverback gorilla who leads the family in all of the activities. The gorillas live within the dense jungles and require trekking to see them.

Congo gorilla trekking permits are the cheapest in the continent ranging between 400 USD to 450 USD in the low and high season respectively. This is contrary to Rwanda gorilla safari permits that are 1500 USD and Uganda gorilla permits at 600 USD and proposed to increase to 700 USD effective July 2020.

Nyiragongo Volcano hike
Sitting over 11,000 feet high, Nyiragongo Volcano is one of the most active volcanoes in the world. The volcano’s caldera is about 1 mile wide and holds a deep lava lake. The perfect way of seeing this bubbling lava at the summit is hiking to the summit. The hike is just a day’s hike to the summit then spend a night in the summit cabins and descend the next day.

The hike top the Volcano summit doesn’t require prior hiking skills and in case of need of a porter, one can be hired at the park headquarters. At the summit, there’s a chef to prepare your meals for dinner and coffee the next morning.

Each morning, local guides leave for the forest at 4:30am to locate the chimps whereas trackers go tracking at 6:00am local time. A maximum of 1 hour is spent in the presence of the chimpanzees with a maximum of 4 people per day. There about 32 chimpanzee individuals that have remained after several civil strife within the region.

Guests who spend a night at Mikeno lodge are free to join the habituation team each morning for free.

Birding  in Virunga National Park
Birding safaris to Virunga National Park are a reward to tourists on birding safaris in Congo with a glimpse of different bird species- about 706 species. Just from your lodging facility, you have the chance to hear persuasive bird sounds from the forest living in very old trees where they build their nests in holes. Bird species possibly seen in Virunga Park include the Double-toothed Barbet, Grey-throated Barbet, Yellow-billed Barbet, Narrow tailed Starling, Madagascar Bee-eater, Darters, Cormorants, Egrets, Skimmers, Francolins, Warblers, Pelicans, Forest Ground Thrush and many more.

4 Days Congo gorilla trek and Nyiragongo Volcano hike is a gorilla trekking safari and Mount Nyiragongo hiking trip to Congo’s Virunga National Park. Your 4 days Congo safaris tour is a private tour that can be planned all year round with 4×4 safari vehicle ground transfers. Read More

6 Days Congo gorilla trekking safari and Nyiragongo hiking tour is a 6 days safari in Congo to Virunga National Park on a gorilla trekking safari and hike to Mount Nyiragongo. Visiting Virunga National Park in Congo offers a chance to trek the only mountain gorillas of West Africa as well as hike one of the most active Volcanoes in the world. Read More

For comfortable safaris in Congo’s Virunga National Park, there several accommodation facilities and here are the best lodges to stay in while at Virunga;

Mikeno Lodge
Mikeno Lodge serves as a comfortable central spot for tourists to start their visit to Virunga National Park. Mikeno Lodge is Virunga National Park’s first lodge opened for tourists in August 2011. Centered between two main Congo tourist attractions, it is a perfect location to begin treks to see the gorillas, and the Nyiragongo volcano. Situated among the trees of a virgin forest, the weather is cool, the views spectacular, and the lodging luxurious.

As you enter the main Lodge you will receive a warm welcome before descending steps into a spacious lounge and bar. Adjacent to the lounge, the dining room offers full-course meals. Both the bar and dining area open onto a large terrace providing the perfect location for a relaxing drink and sharing of the day’s activities.

Bukima tented camp
Bukima tented camp is located just adjacent to the Virunga park boundary, initially a research station. The camp offers accommodation in luxurious tents with magnificent views in and around the tents. The views are dominated by the Mikeno mountain peak and Nyiragongo active volcano across the valley.

Sometimes, the gorillas wander into the park and later on move back to the jungle, something that impresses many of the guests at the hotel.